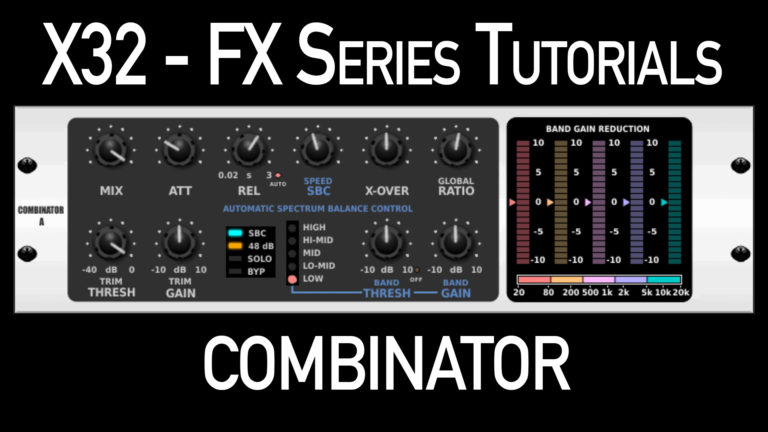 Welcome to my Behringer X32 FX Series tutorials. Today we are going to be looking at the Combinator. Be sure to watch my YouTube video that I released on the Combinator as it goes along with this blog post!

The Combinator is a Behringer X32 Effect that is a Multi-Band Compressor/Limiter. This effect is slightly modeled after the Behringer Combinator MDX-8000 which was released around 1993. There is very little information about this piece of gear, but it was described as a Multiband Compressor/Leveler/Peak Limiter. The MDX-8000 had 8 ‘THAT Corp 2150A’ DCA circuits, 16 ‘THAT Corp 2252’ RMS-Level Detector circuits and not to mention numerous OP-Amps inside; it comprised of 2 channels and had 4 bands of adjustment.

There are two layers of controls that the Combinator gives us for control: 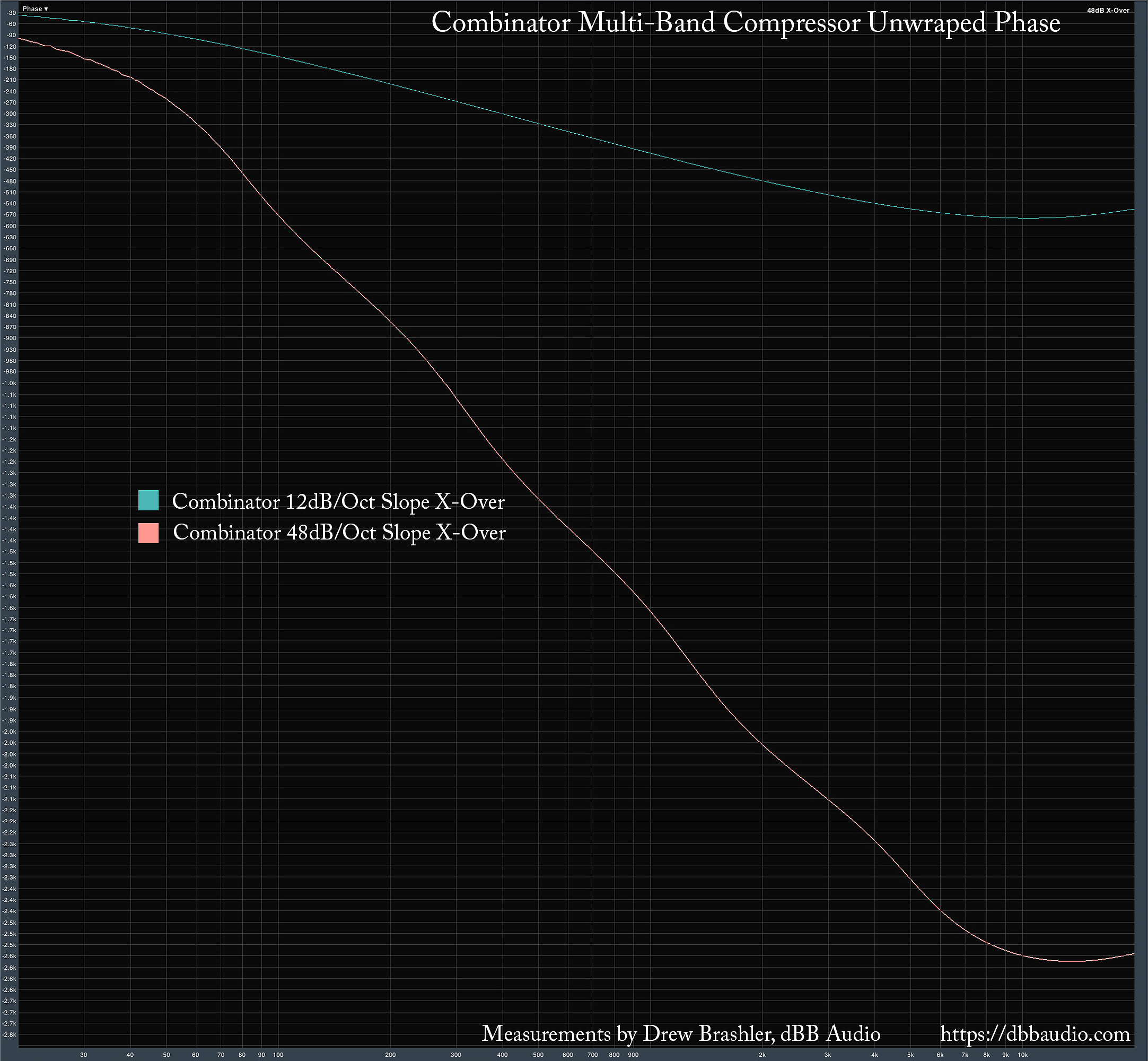 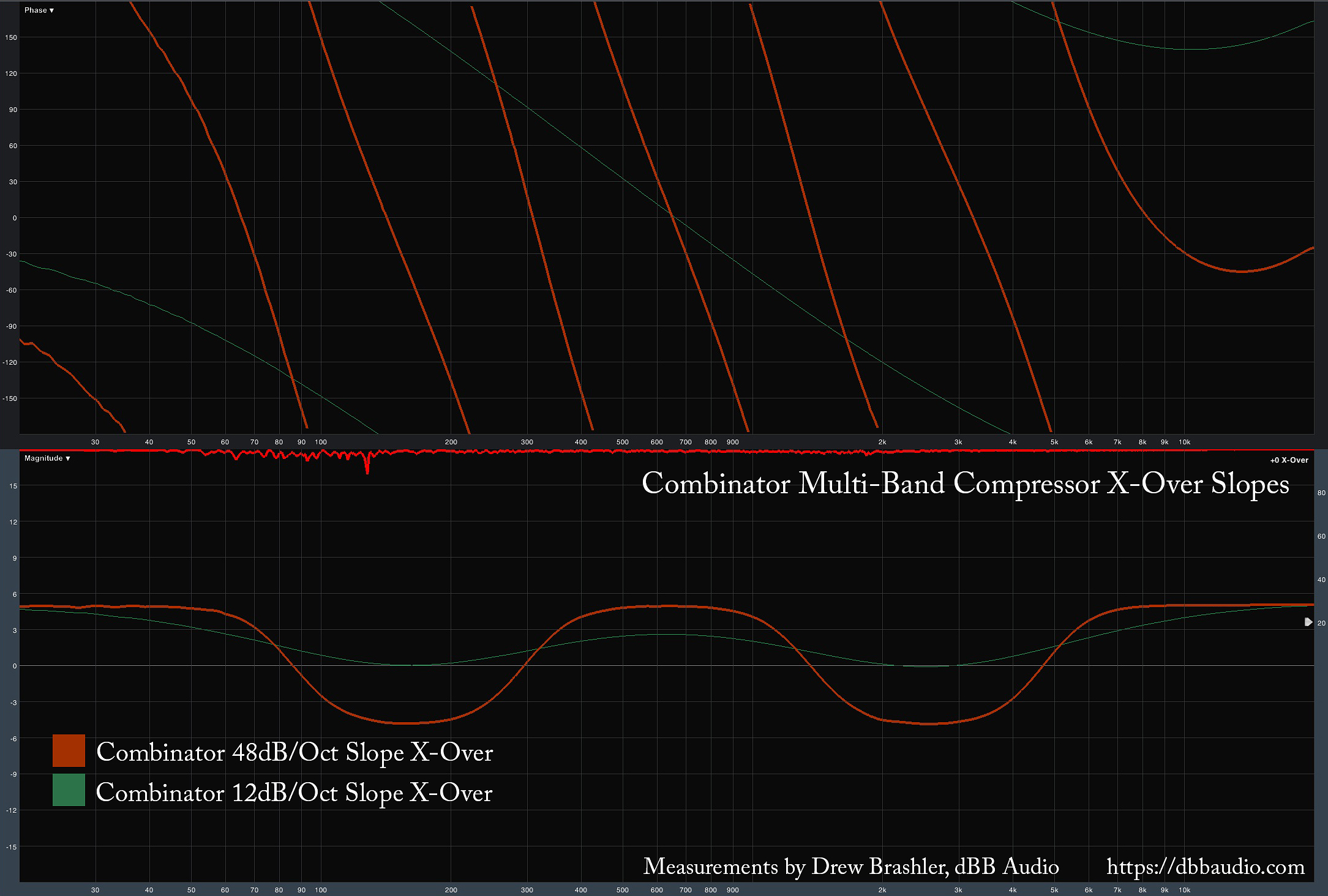 The Combinator has 5 bands of compression and these have adjustable frequency areas. These areas are set with the x-over setting. This setting is adjustable from -50 to +50 and will vary where the crossover points are. We can see below with the 48dB/Octave setting, we have the ability to move the frequency patterns. 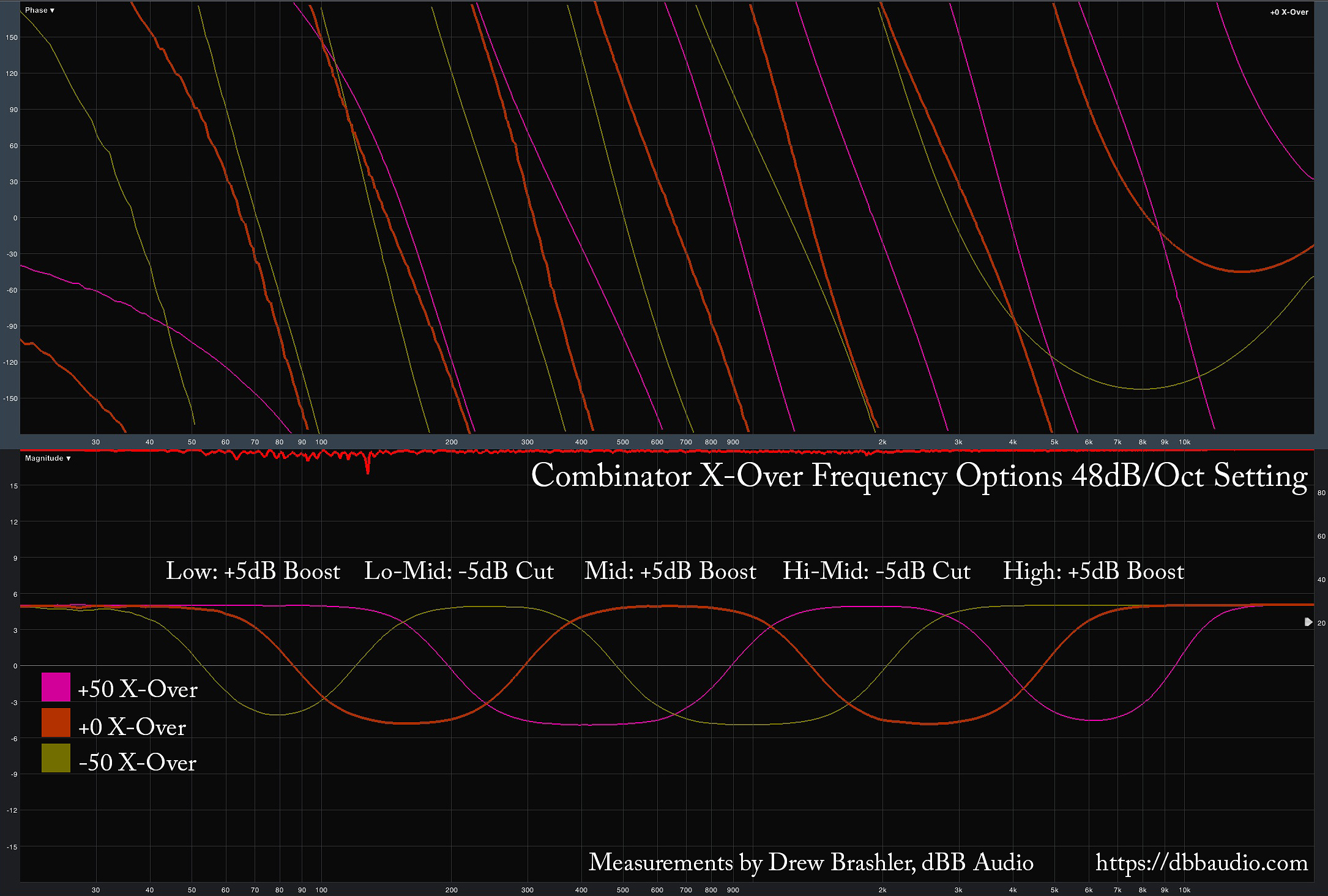 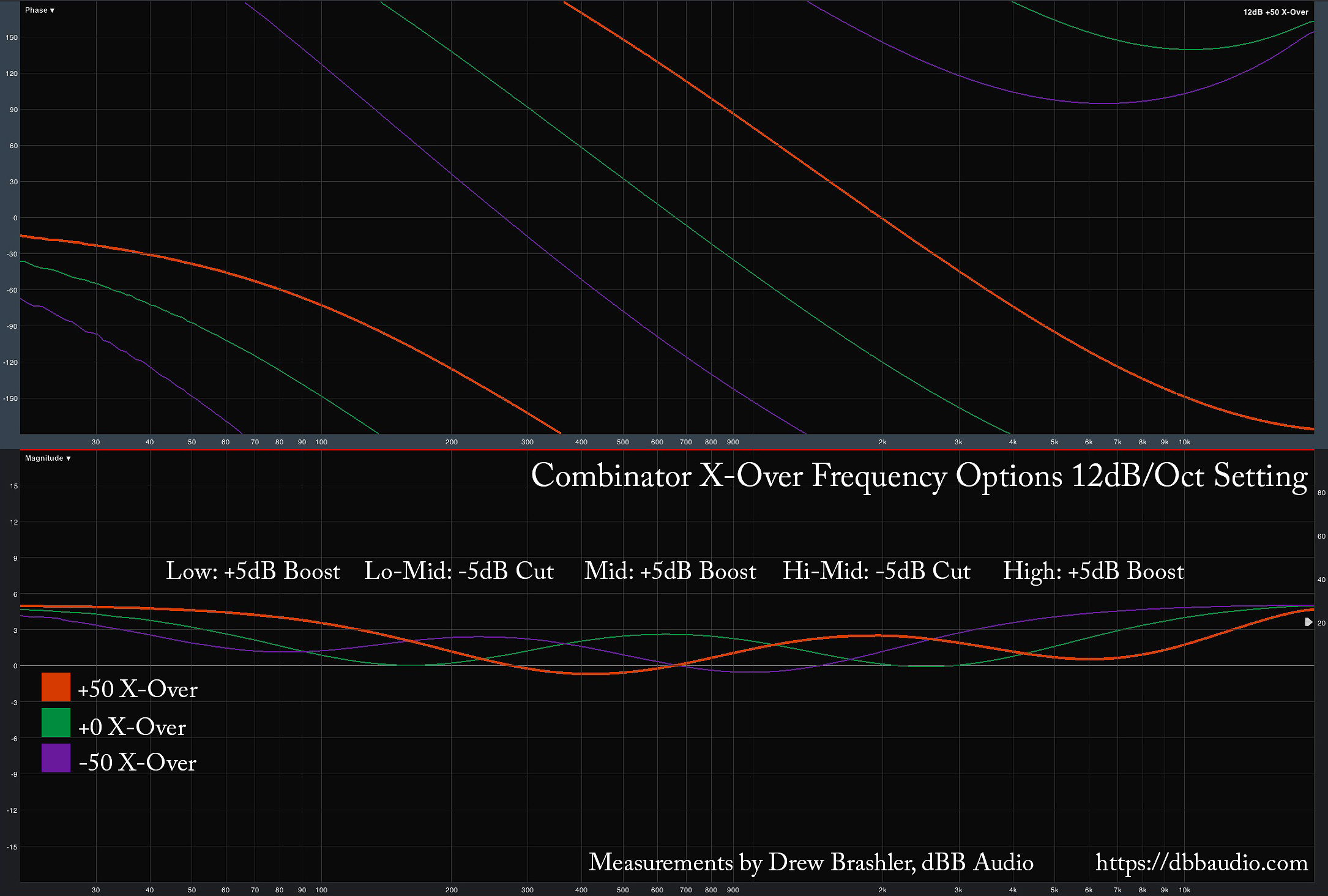 The Automatic Spectrum Balance Control, or SBC, is an automatic makeup gain that is built into the combinator. Much like makeup gain on a compressor, the SBC ‘makes up’ the amplitude loss of the compression or limiting of the bands. The difference between makeup gain and the SBC, the SBC does this makeup gain for you on the fly on a per band basis to keep a flat EQ output of the combinator. Up to +10dB of makeup gain will be applied which is equal to the amount of reduction currently being applied by the combinator.

Using the SBC allows for compression on the 5 bands to be dialed in without worrying about changing the EQ or levels inside that specific band.

We can see a spectrum measurement of the SBC being turned on and off below. One thing to note is that the HIGH band has a level of -11dB with the SBC off, with the SBC on that is -1dB. Remember that only up to +10dB of makeup gain will be applied.

The SBC Speed is the time that the SBC delays before applying gain or reducing the gain. This is set from 1 to 10.

Below are tests of 2 second long 10kHz sign waves at two different amplitudes. One is set to start off above the threshold, the 2nd amplitude is below the threshold. This shows us how fast attack and release times are, as well as show any makeup gain times. 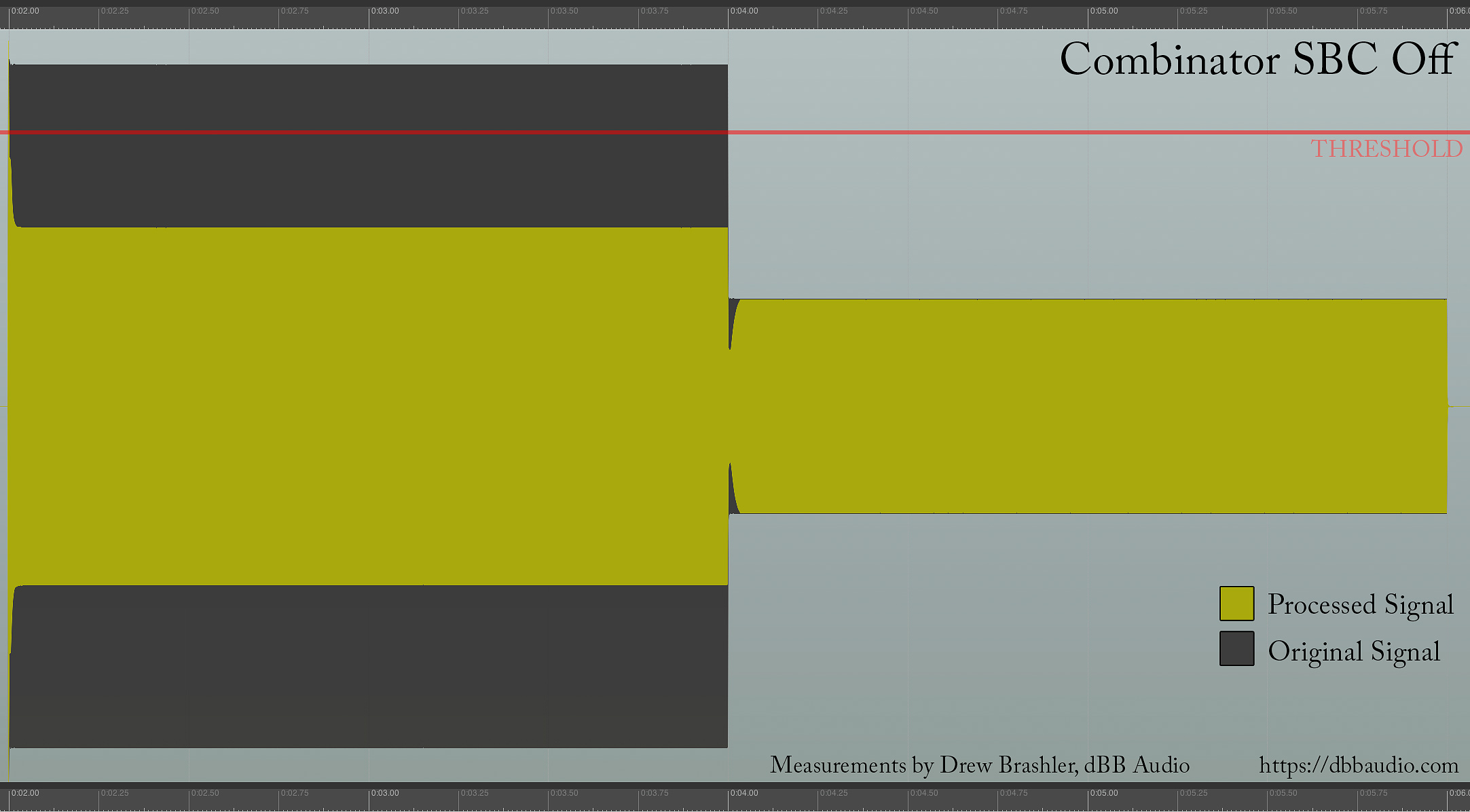 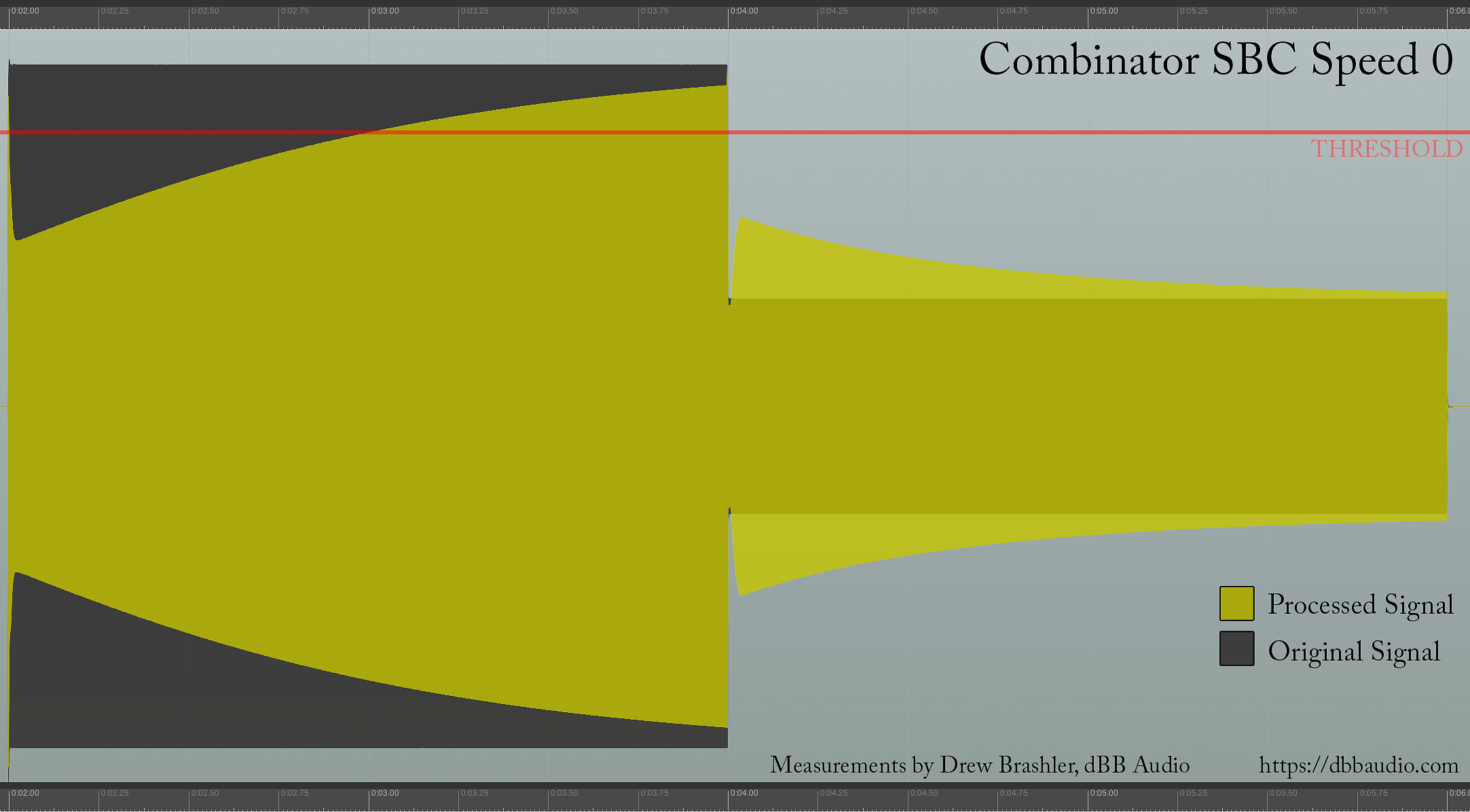 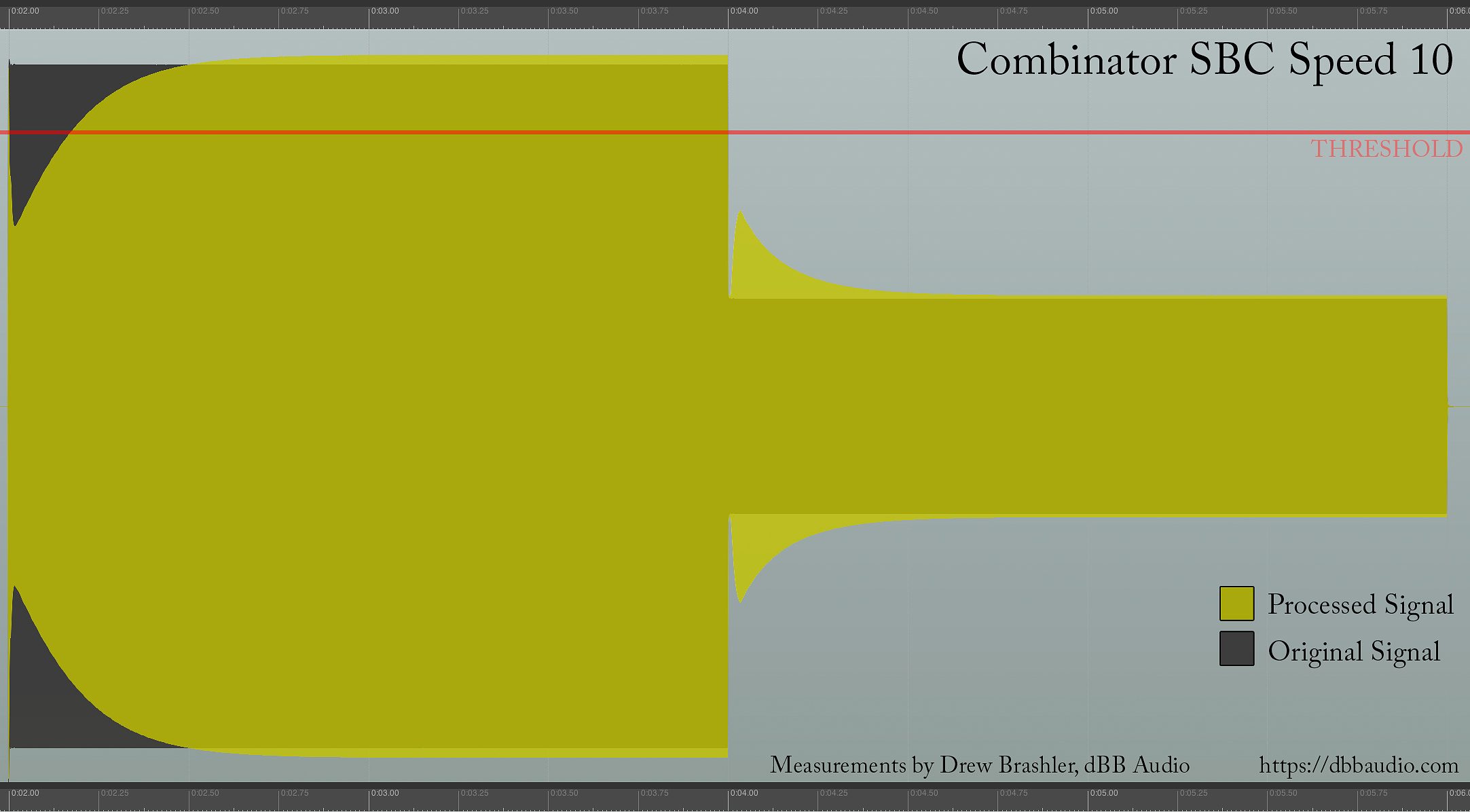 The Combinator gives us Attack times from 0 to 19.

Using the test of 10kHz sine wave, I was able to estimate the attack times of the Combinator. Attack 0 is a slower attack while Attack 19 is a faster attack. 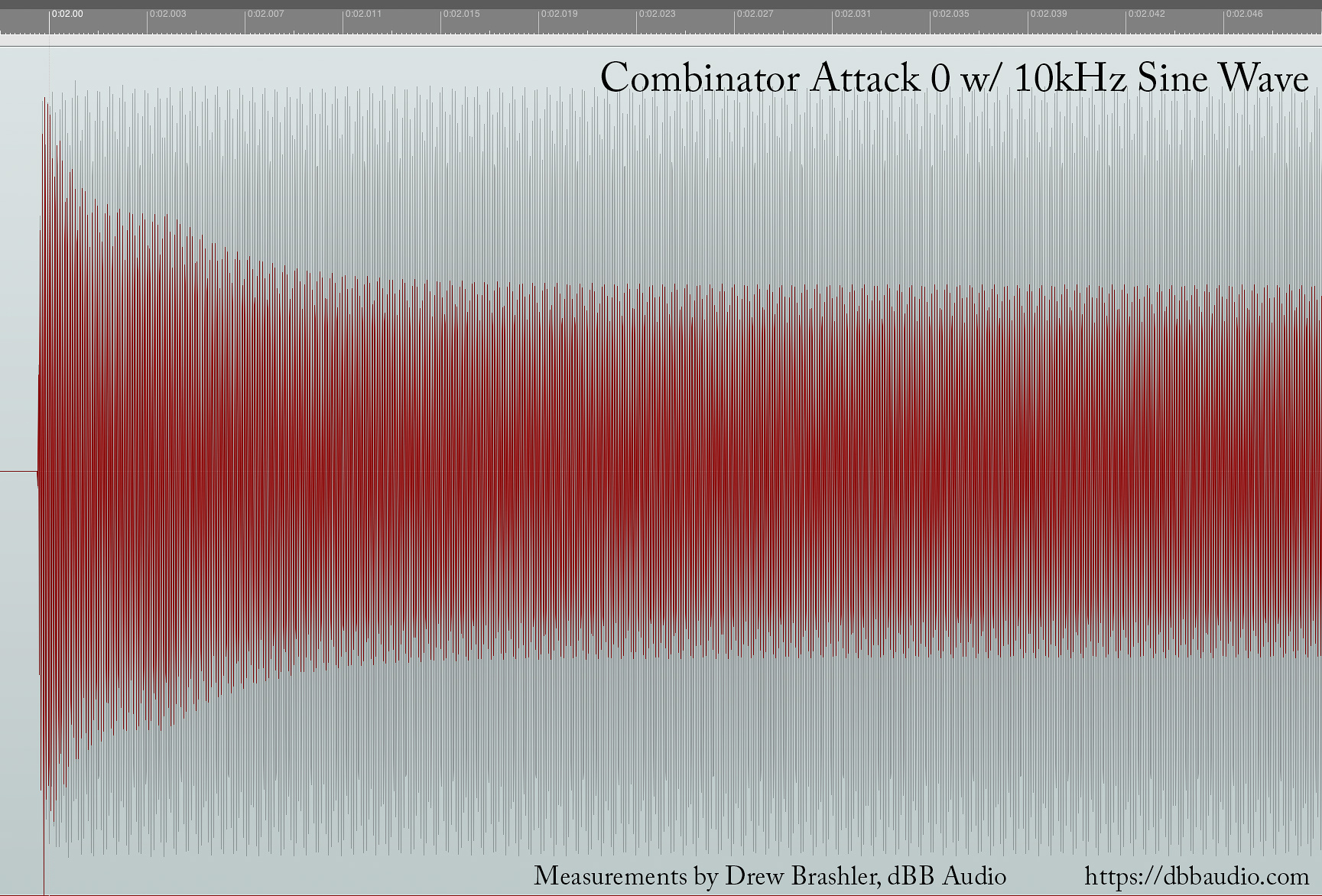 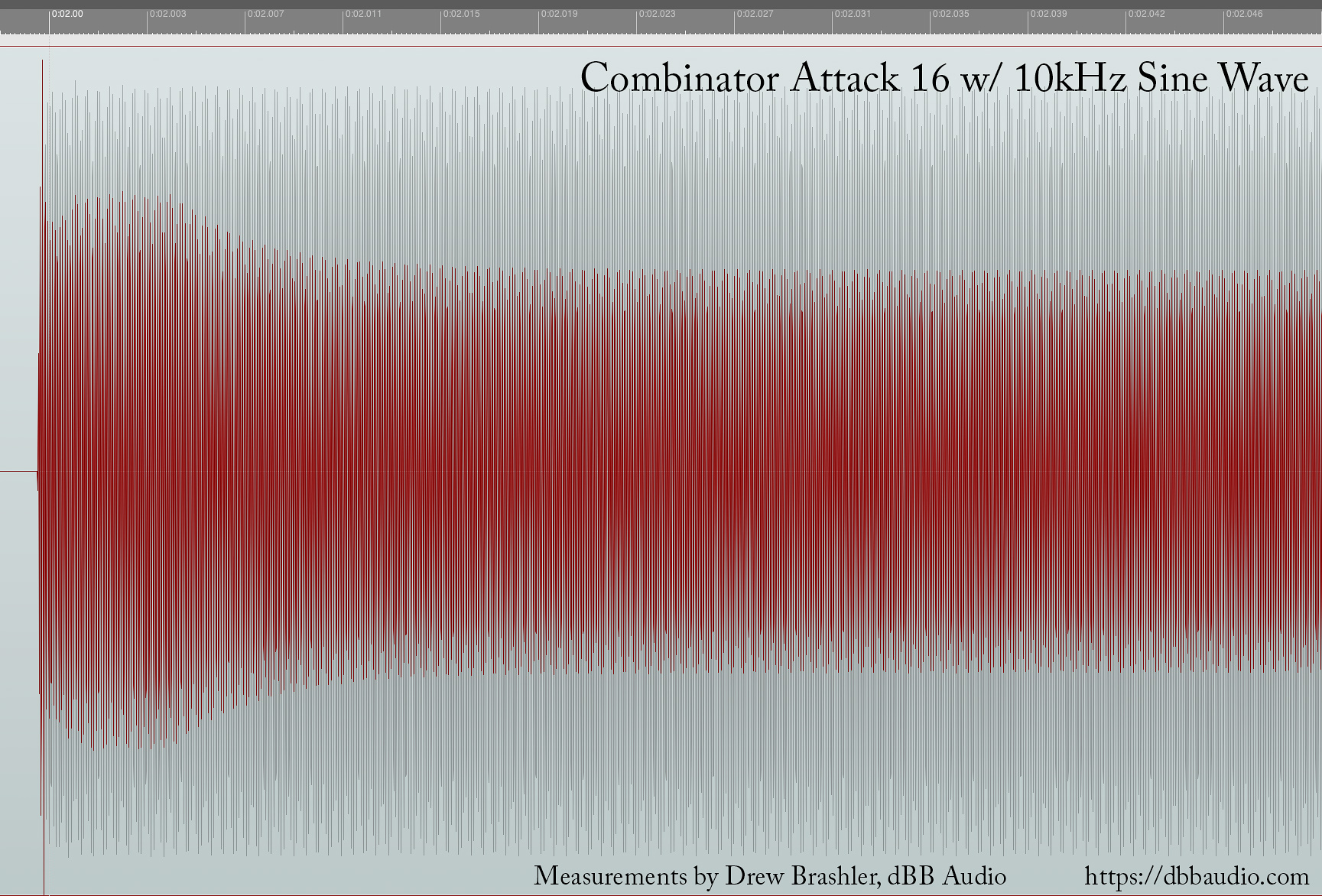 The release is adjustable from 20ms to 3 seconds and has an auto-release setting.

I think the most interesting thing about the Combinator is that no matter how much EQ is applied using the band gain the phase does not change. Typically when EQ is applied using a board EQ or graphic EQ a slight phase change will occur when boosting or cutting. You can see in my transfer function measurement below that the phase trace does not change even when a boost of +9dB is applied to both the low freq. and the high freq. 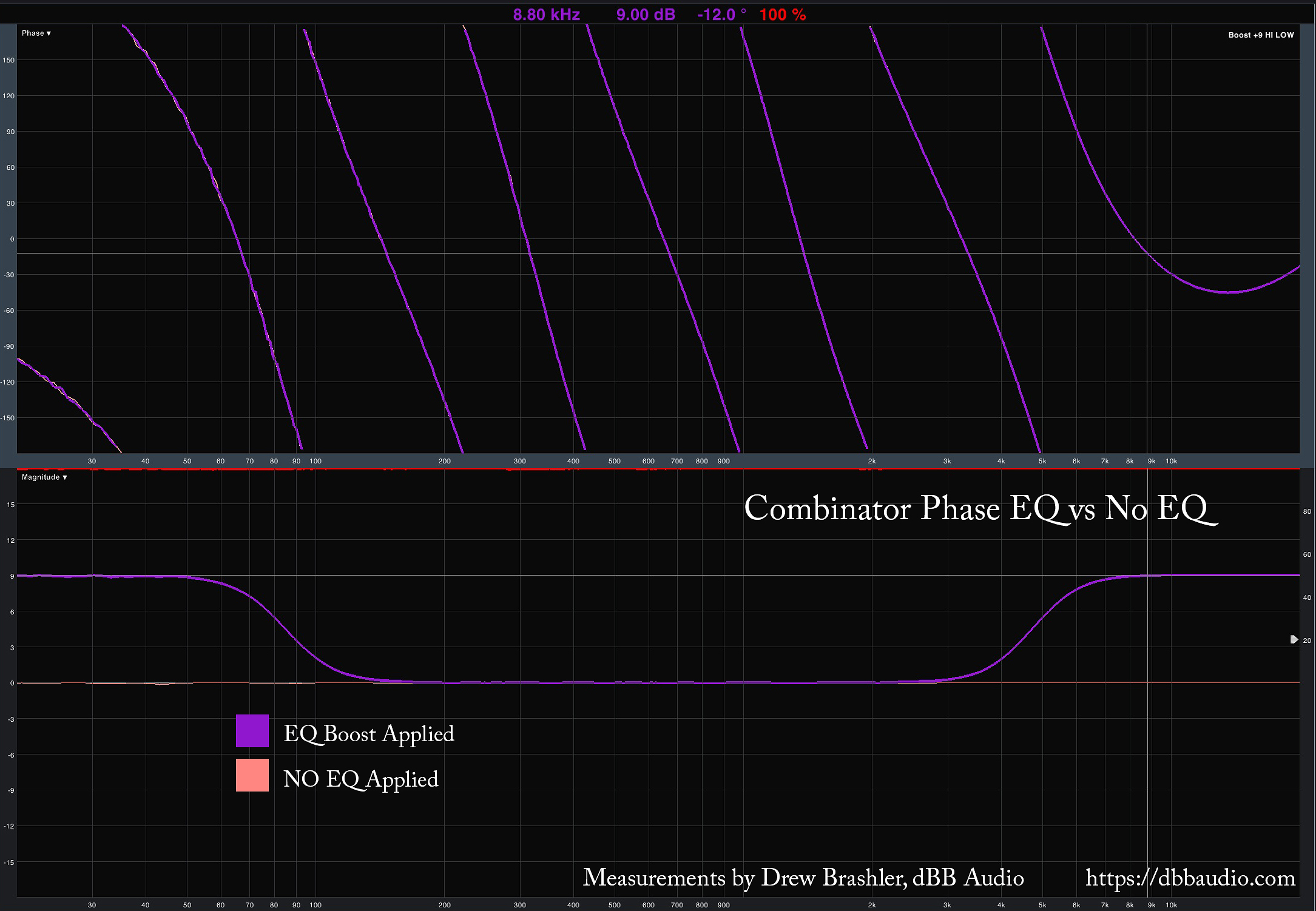