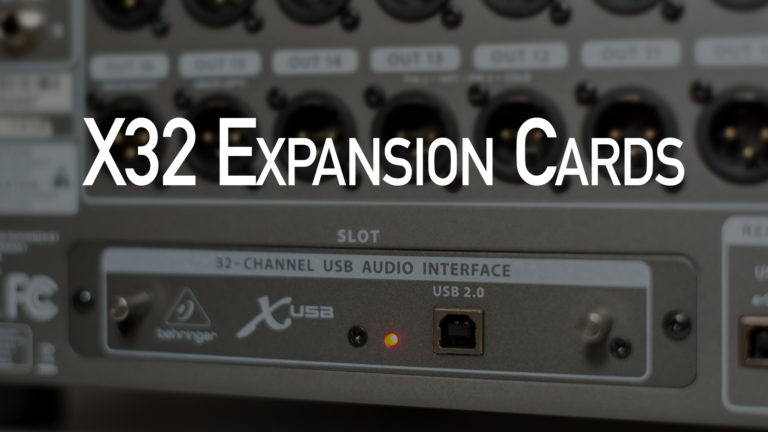 The Behringer X32 Expansion Cards slot is something that is quite useful on the X32 and M32 consoles. Also, all of the versions of the console have it! Today, I want to go through all of the information regarding the use of expansion cards and how they can help us.

Depending on when your X32 was made you may have one of two cards installed. You may have the X-USB or the X-UF card.

A USB 2.0 interface that provides a simultaneous 32 in and 32 out USB recording/playback interface running at 24-bit and either 44.1kHz or 48kHz sample rate (set to the internal clock of X32). This is the newest version of the card and chances are if you purchased your X32 recently, you have this card.

There is a LOT of functionality to this card, and will cover the needs of a lot of people! Not only do we have the ability to record and playback 32 channels of audio, but we can also use this for tapping into plug-ins on your computer using Waves Multi-Rack Native!

This is almost the same as the Behringer X-USB card we see above, but it also adds the functionality of FireWire 400 to the card. This is the older version of the card and shipped with the original release of the X32’s.

Because these are two DIFFERENT cards, there are two different drivers available to install AND two different firmware for the card. When installing either the expansion card firmware or the driver for Windows, make sure to check if you have the X-USB or the X-UF card.

With Mac OS X, you can see that we have compatibility with CoreAudio with both the X-USB and the X-UF cards. This means, plug it in and start recording! No need to install drivers!

A huge benefit of both of these cards is that we can record 32 channels. Just FYI, the tap for the X32 is before all of the channel processing and is right after the A/D conversion. With that being said, any of your channel processing will NOT be recorded (unless you do some fancy routing like I explain in this blog post: Behringer X32 Recording with Effects).

Now that we have our USB or FireWire interface, we can start recording into our favorite DAW. I know that Reaper is a favorite of a lot of people, so I did a video tutorial on how to get Reaper set up with the X32 and how to get the X32 set up for virtual sound check as well. Take a look at that video here!

Lastly, one of my other favorite DAW tools is Waves Tracks Live. It is a free download from Waves and is one of the easiest ‘virtual sound check’ DAW’s I have worked with so far!

This is Behringer’s updated replacement to the X-USB and X-UF card! The Behringer X-LIVE card is packed with updated features and you can read about my dedicated post about the Behringer X-Live card here.

The X-LIVE card gives us the ability to record and playback all 32 channels of the X32/M32 to an SD card. The card has dual SD card slots which accept SD and SDHC cards up to 32GB in size (larger capacity cards work, they are just not officially supported). There is a CR123A battery slot to provide backup power to the X-LIVE card which allows for the card to finish saving the audio file in case of power loss.

Use the SD and USB independently

The really useful part of the Behringer X-LIVE card and the Klark Teknik DN32-LIVE card is that you can use the USB section separately from the SD section. This means you can utilize the USB>Computer for Waves Multirack Native or a backup recording path with Waves Tracks Live, AND you can record with the SD portion of the card.

Another great feature of the X-Live card is that it is a fully integrated card with the console that features Virtual Sound Check without an external computer.

This is an Audinate Dante Expansion Card for the Behringer X32 & Midas M32. This card lets us interface our console with Dante Networked Audio. The huge benefit of Dante is that you can route one to one patching inside of the Dante network meaning that you can potentially bypass the ‘block of 8 routing’ inside the console. The only downside is that the main preamp is part of the Dante device so it is separate from the X32. You will still have trim on each channel of -18dB to +18dB of gain adjustment.

One really cool feature of this is that you can do virtual sound checks and/or recording using Dante Virtual Soundcard installed on your computer.

This is a MADI Expansion Card for the Behringer X32 and Midas M32 consoles. The real use of this here is for interfacing with other consoles that use MADI! Protocols supported by the DN32-MADI and X-MADI include AES10-1991 with up to 56 x 56 channels, and AES10-2003 with up to 64 x 64 channels.

Another huge benefit is that you can use the BNC as a redundancy when using the Optical connections.

This is an ADAT Expansion Card for the Behringer X32 and Midas M32 consoles. ADAT is a very common connection for a lot of recording gear so this would be a good pairing for some recording studios that utilize ADAT in their studio.

This card allows direct recording and playback of 32 channels to a USB drive connected to the uTrack-X32 Expansion Card! For those needing to play to backing tracks and wanting a really simple & compact setup, this card might be able to suit your needs!

Upon first glance we see that there is an HDD USB slot AND a USB connection for your computer. The uTrack-X32 does work in a similar way to the X-USB and X-UF cards in that it can use USB 2.0 to input & output 32 channels. However, you are only able to use either the HDD or the USB. If a hard drive is connected to the HDD slot, the USB connection is disconnected

Now, THIS one I am really excited about and you can read more about the X-WSG here on my dedicated blog post.

This is an interface card for adding Waves SoundGrid capability to the Behringer X32 and Midas M32 consoles. With this setup, one can insert Waves plugins on all of the 32 inputs of the console and run some really incredible plugins like the Waves C6, Waves CLA-76 or even the Waves SSL plugins. 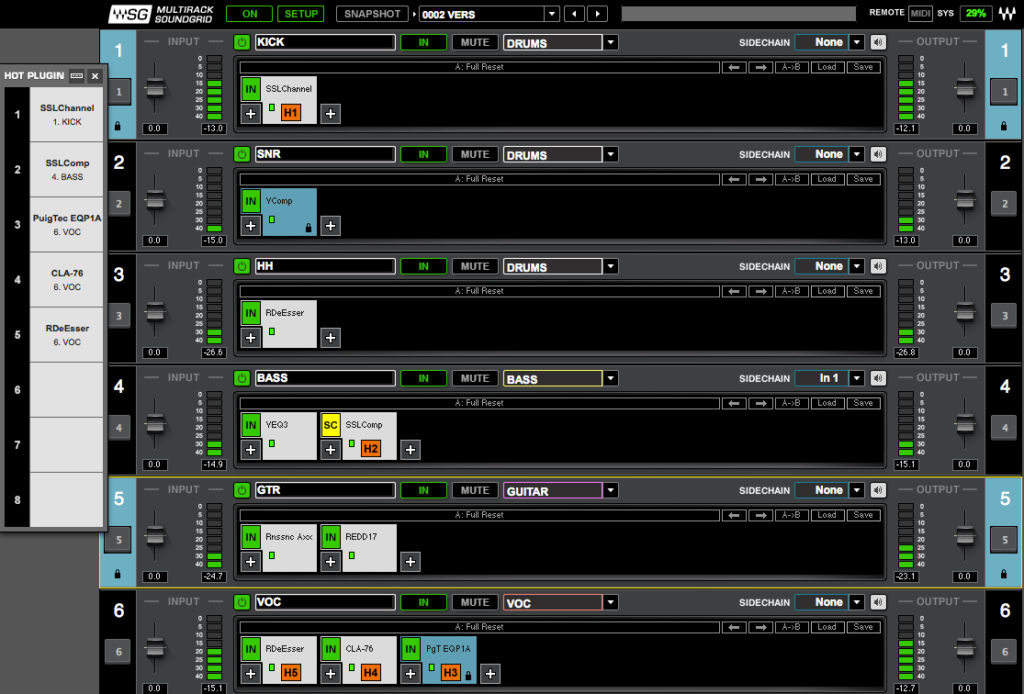 Additionally, you can also run Waves Track Live at the same time to record 32 channels of audio as using Waves SoundGrid for the plugins! 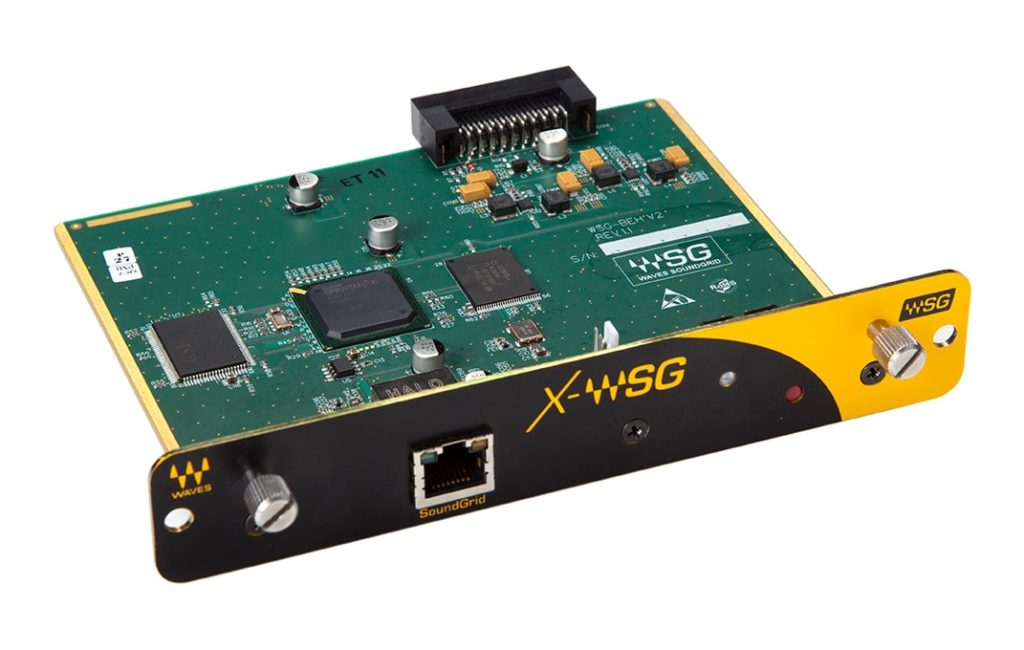 If we were to add one of the insertable effects of the X32 effects rack on a channel, we would be adding 0.67 ms of latency.

Enter Waves SoundGrid, the beauty of this is we can run all 32 channels directly from the preamps, to Waves SoundGrid, and then back to the console for additional channel processing. It is sefficientnt that it only adds 0.86 ms of latency. This means you can have 32 channels of multirack with a total round trip input to output on the X32/M32 of 1.69 ms total!

To read more about the X-WSG latency, read my blog post about it here.

Waves has a bundled combo and This combo is all you need to get your X32 and M32 working with SoundGrid and MultiRack. It includes the following:

If you are thinking of getting the Waves X-WSG combo for the X32 or M32, if you click through this link below, it will save you 10% off of your Waves purchase. 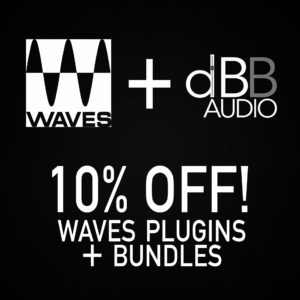 Installation of the expansion cards is fairly easy! Grab a Phillips screwdriver and remove the two screws on the right and left side of the card, then simply pull the card out. Slide the new card in and then replace the screws!

Routing for the Expansion Cards

This is where we have to really think about input and outputs because the terminology can get confusing pretty fast! The X32/M32 has it’s Input Routing and Output Routing all in the Routing section on the console. To get there, press the ‘Routing’ button to the side of the LCD screen. 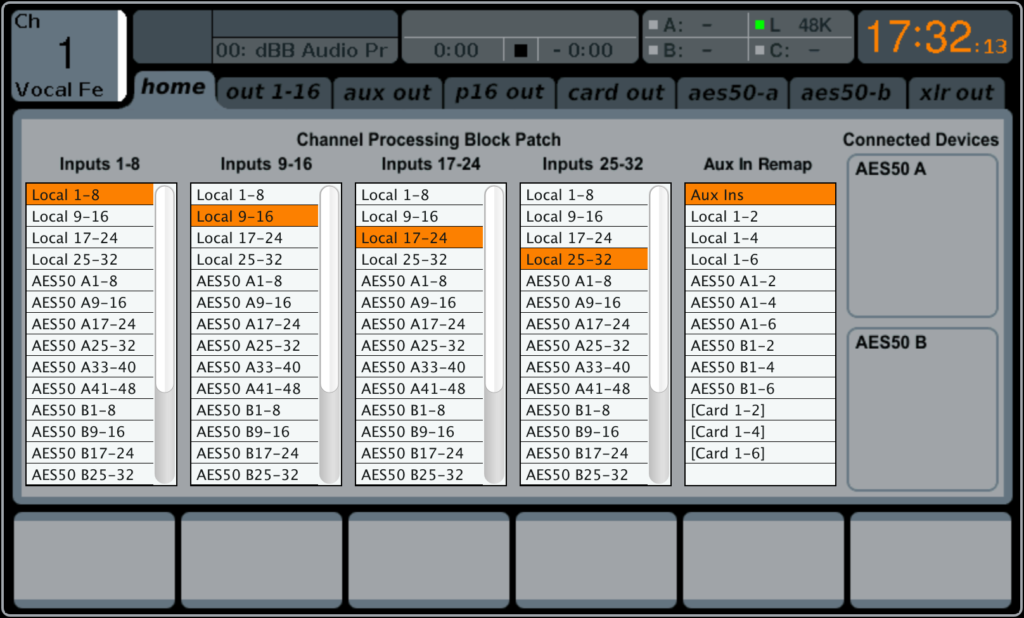 The ‘Home’ tab is where we get our input routing for the console itself. In normal operation, we are pulling from the Local 1-32 as these are the inputs of the X32/M32. Some of you might be pulling from AES50 if utilizing the digital snakes. 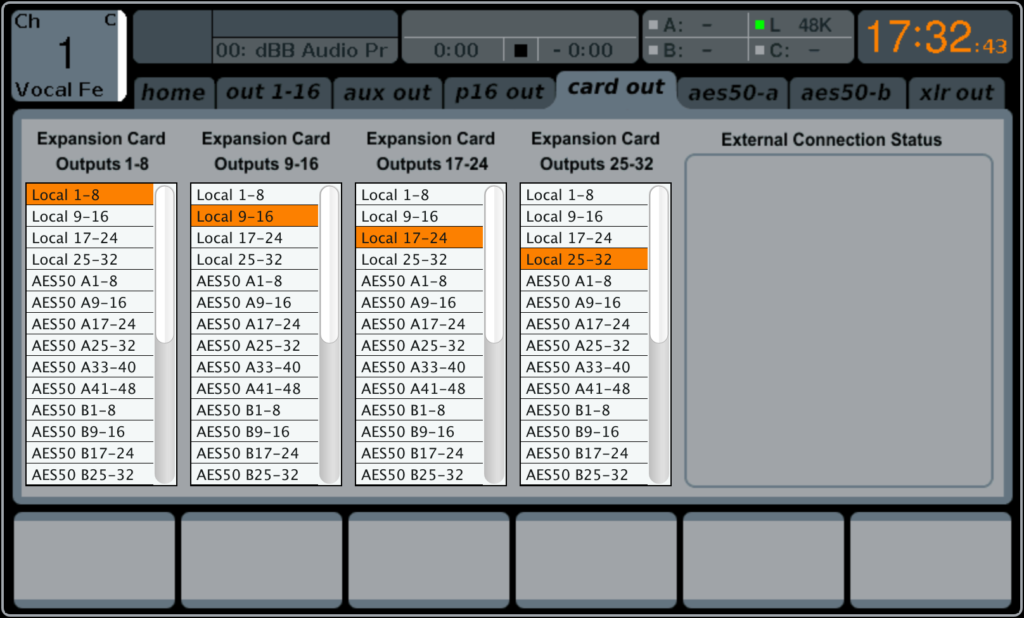 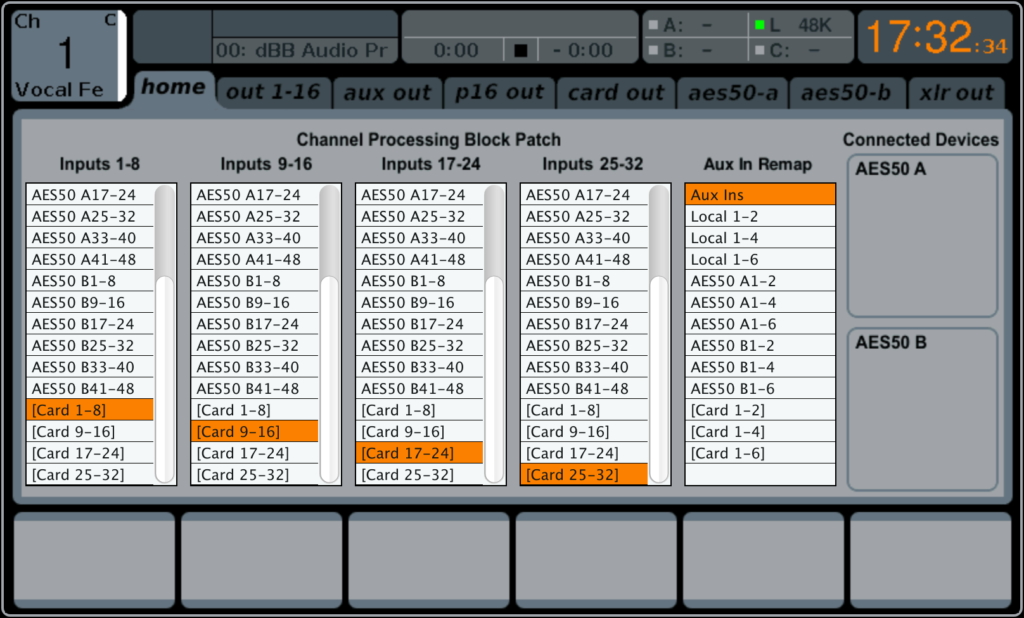 Hopefully, for some of you, this clears up a lot about the expansion card slot. Also, hopefully, I have saved you some time with installing Windows drivers for your X-UF or X-USB card (please check again!). But to be honest, I am super excited about something with the Waves X-WSG card, but I still….can’t tell you about it yet!

One additional thing that I do want to mention is that if you are needing a backing tracks playing device, use a Behringer X32 Core! You can use the built-in X-USB (or X-UF) card to connect to your tracks computer, then use AES50 from the X32 Core to your main X32! It is a really slick way of getting tracks to your X32 and you don’t have to lug around additional digital snakes or hardwired snakes to get it connected!