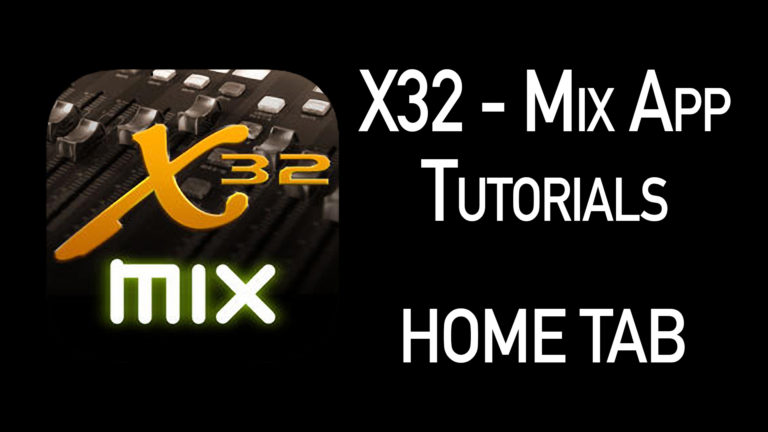 When Behringer originally released the mixing app for the iPad it was called XiControl, but this was back in 2013! This week, Behringer just released X32-Mix v3.0.0! With the amount of users that rely on the X32-Mix App when using the Behringer X32 Rack and X32 Core, I have decided to make a full series for it, so today, I am releasing the ‘X32-Mix App Tutorial’ series! Basically, I will go through tab by tab on the iPad app to go over the different controls and how to utilize all of the application!

To use the X32-Mix app, you will need a few items and you will need to ensure they are correctly set up! Here is a list of exactly what you need:

First thing would be a wireless network! Don’t cheap out on routers, but to be honest, I have used the Linksys WRT54G for years without any issue. To turn this $10 Goodwill find into a routing beast, install DD-WRT onto the router and enjoy all of the new features you will find! Connect the X32 with the CAT5 cable from the wireless router to the ‘Ethernet’ jack in the ‘Remote Control’ section on the back of the console. 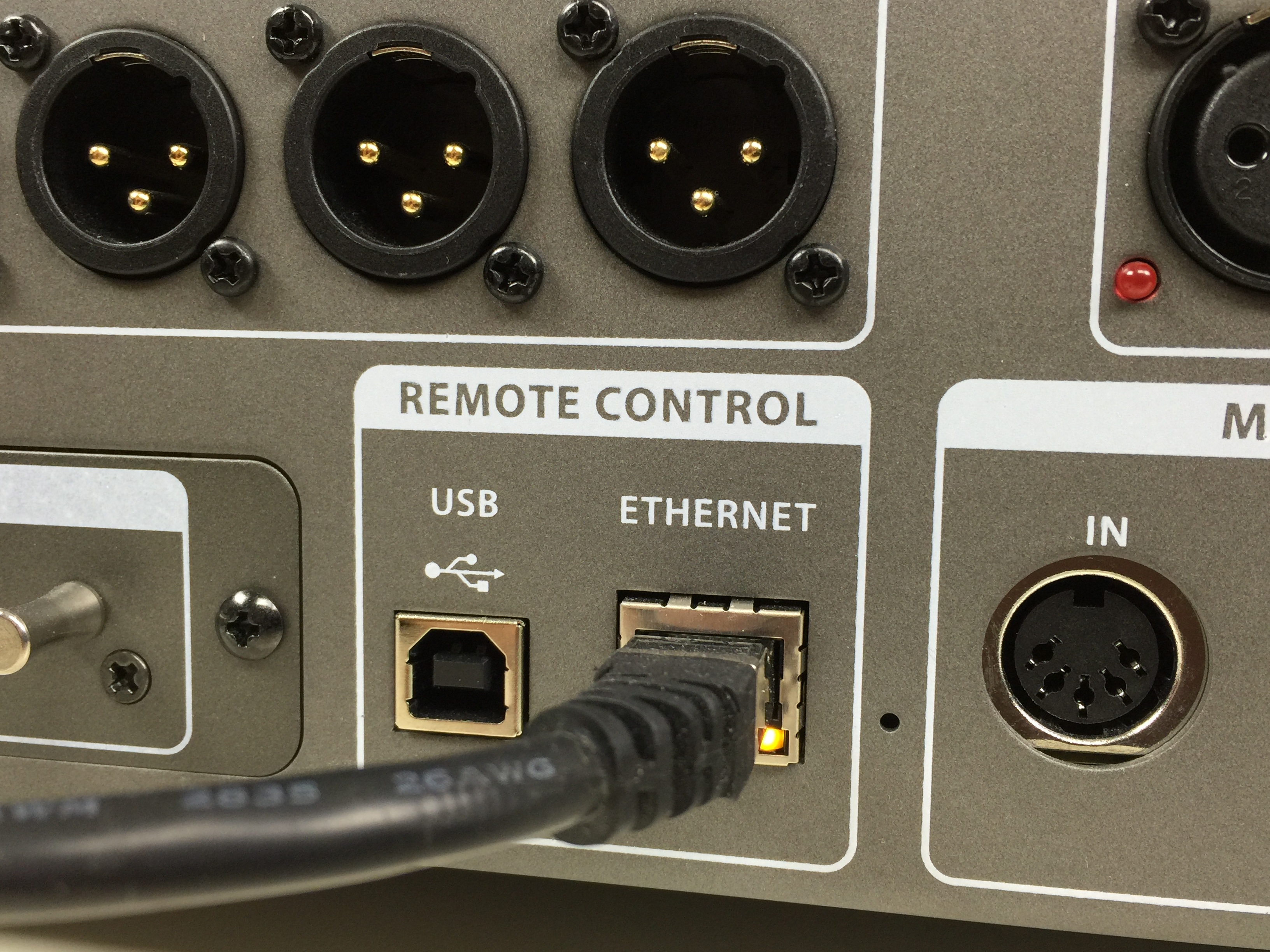 It is my recommendation to use an app that searches for open WiFi channels, but once you have a wireless network set up and the IP and Subnet Mask Addresses, go to the X32. Once at the X32, press the ‘setup’ button and tab over to the ‘network’ tab. Once there choose an open IP address on the network for the X32 and put that and the other information into the addresses.

In my example I am using the following: 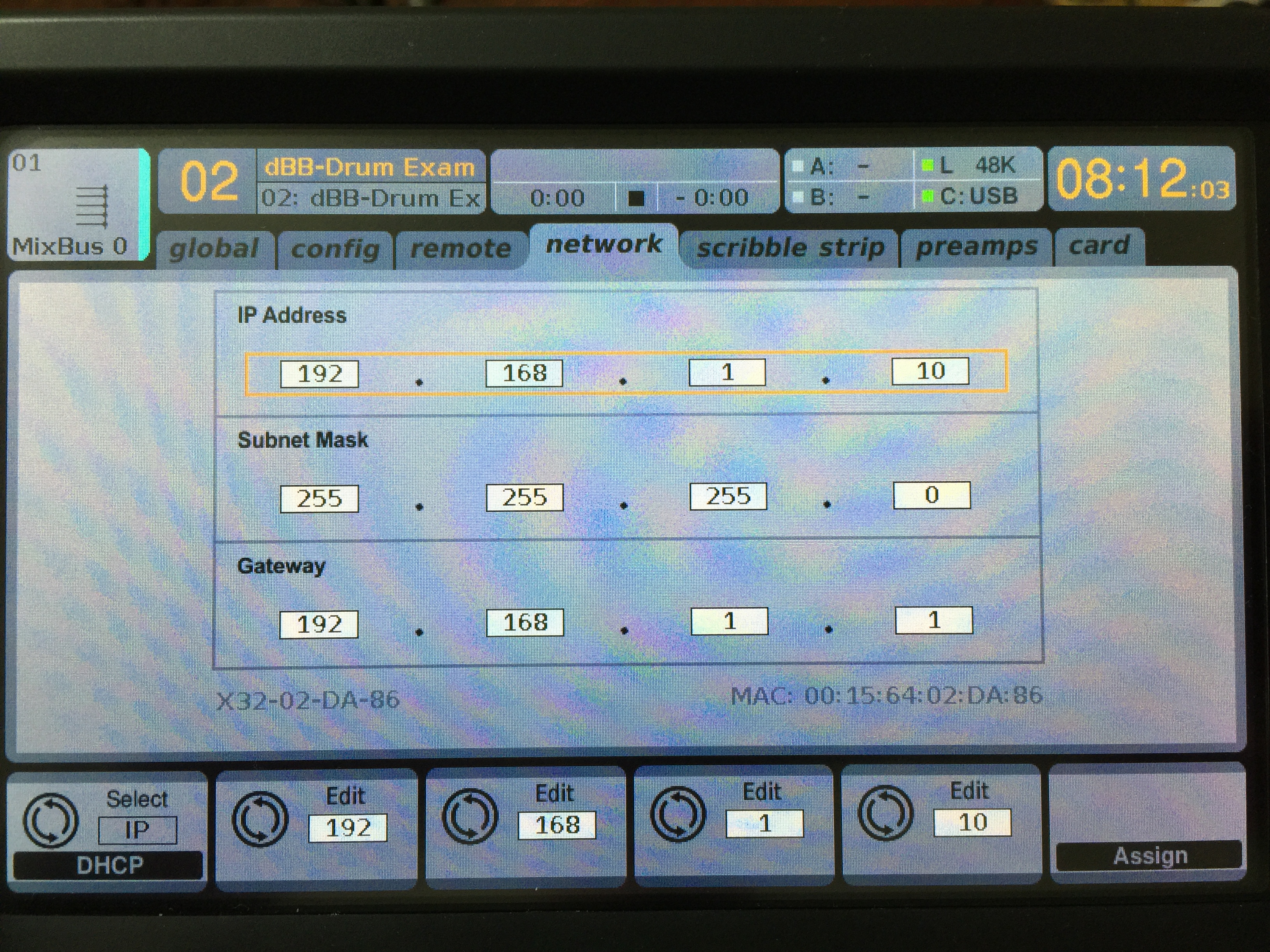 After configuring your wireless network and X32 settings, grab your iPad and open the X32-Mix App. Press the ‘i’ in the upper left-hand corner which is directly under the X. Once you press that it will pop up the network configuration window for the app. It will look like this: 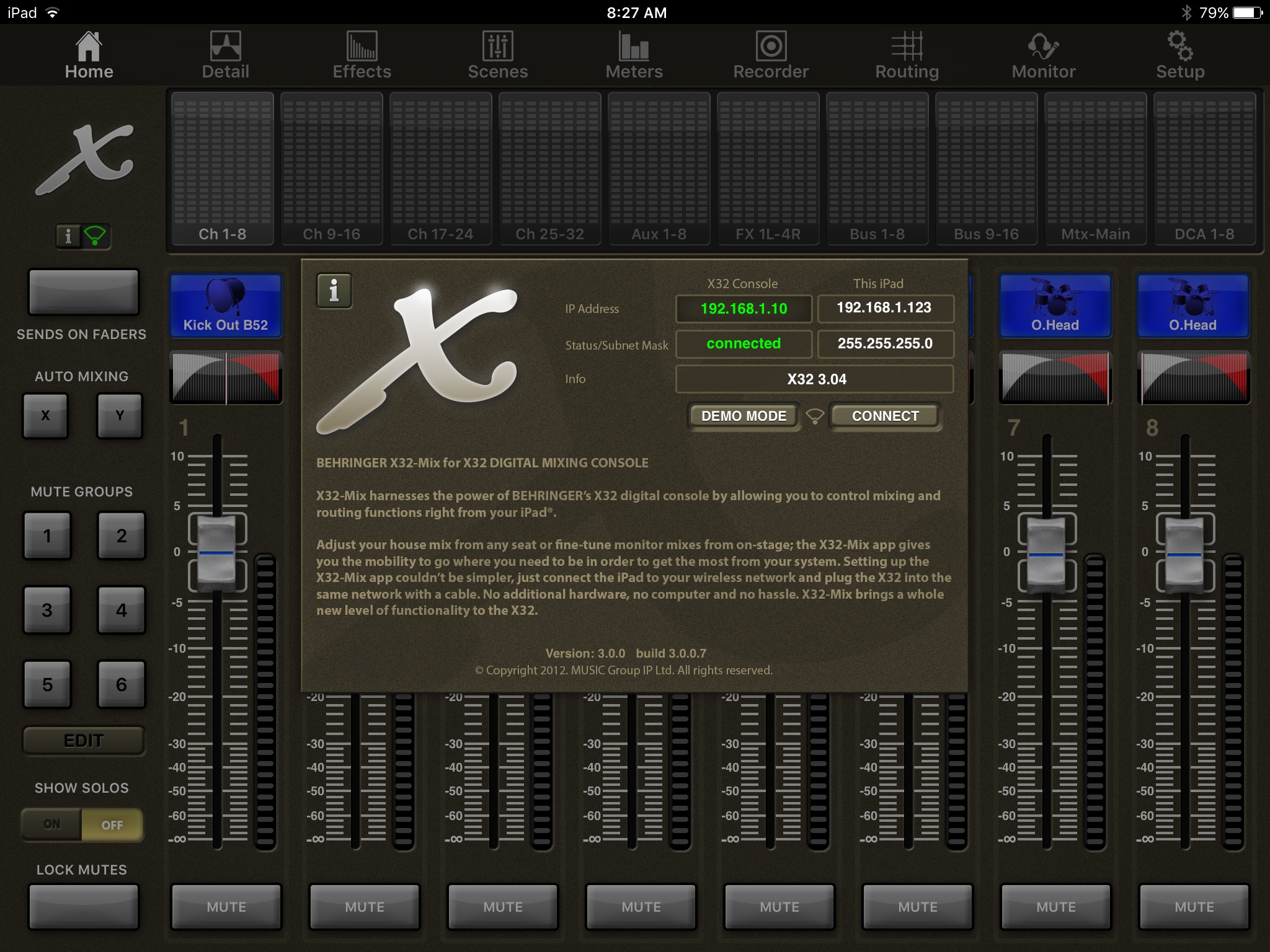 You will see that the screen will show the iPad network address, click in the X32 Console IP Address and input your console network address, 192.168.1.10. After entering this, press the ‘connect’ button!

The main part of the X32-Mix App Tutorial today is the Home Tab! This is the tab where you will do the majority of your mixing while using the app. Below we can see a screenshot of the Home Tab: 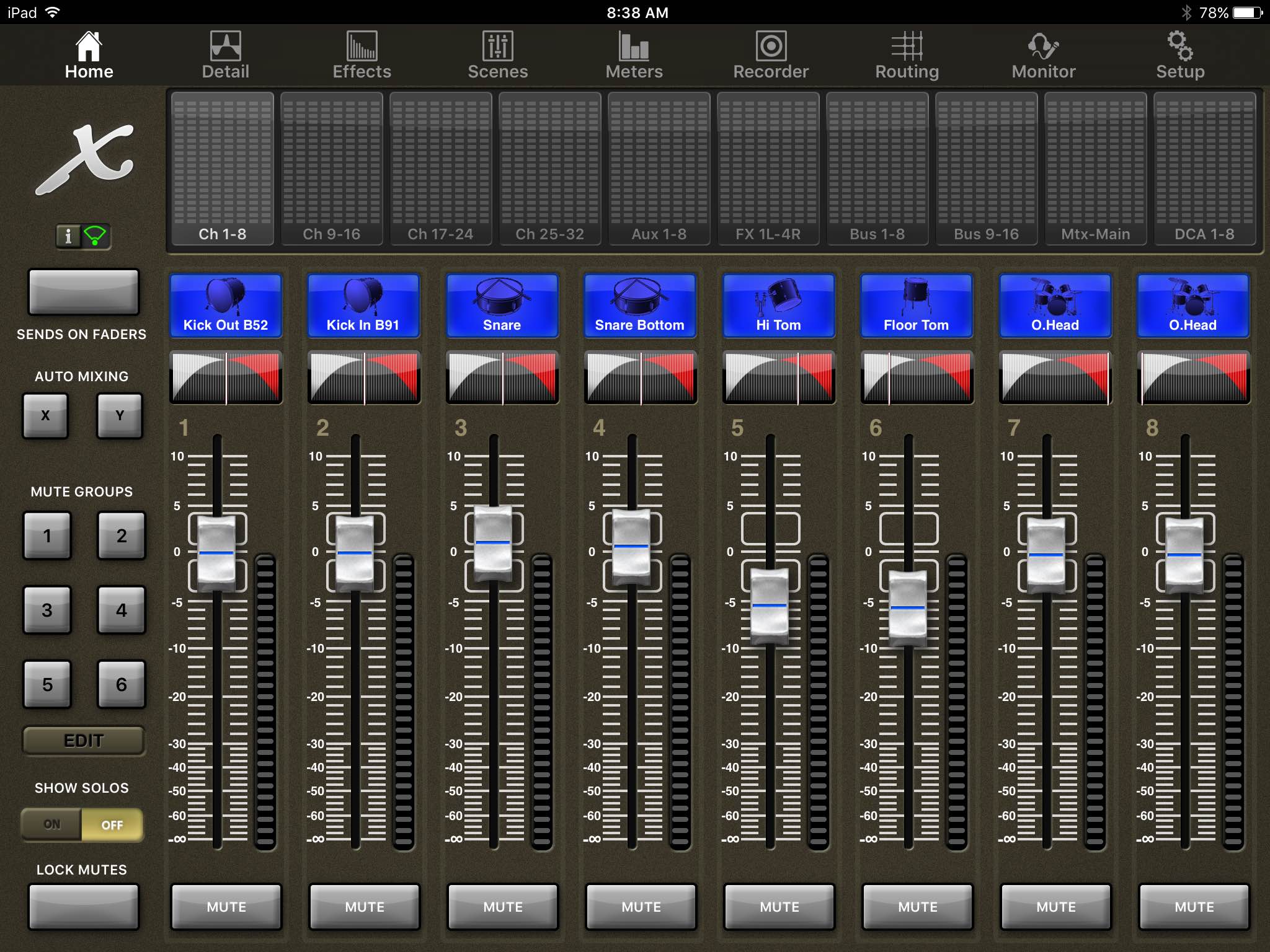 We can see that there are the following tabs along the top:

Along the left side we have the following controls:

To mix, simply select the bank of channels that you want to adjust, and then touch the faders to raise or lower. The app allows multi-touch so you can control one to eight faders all at the same time. There is no ability to press and snap the fader to a certain position, you will need to press and hold the fader on the screen.

The next thing down is the pan. You can pan by pressing and moving right to left. To return the pan to center, double tap. 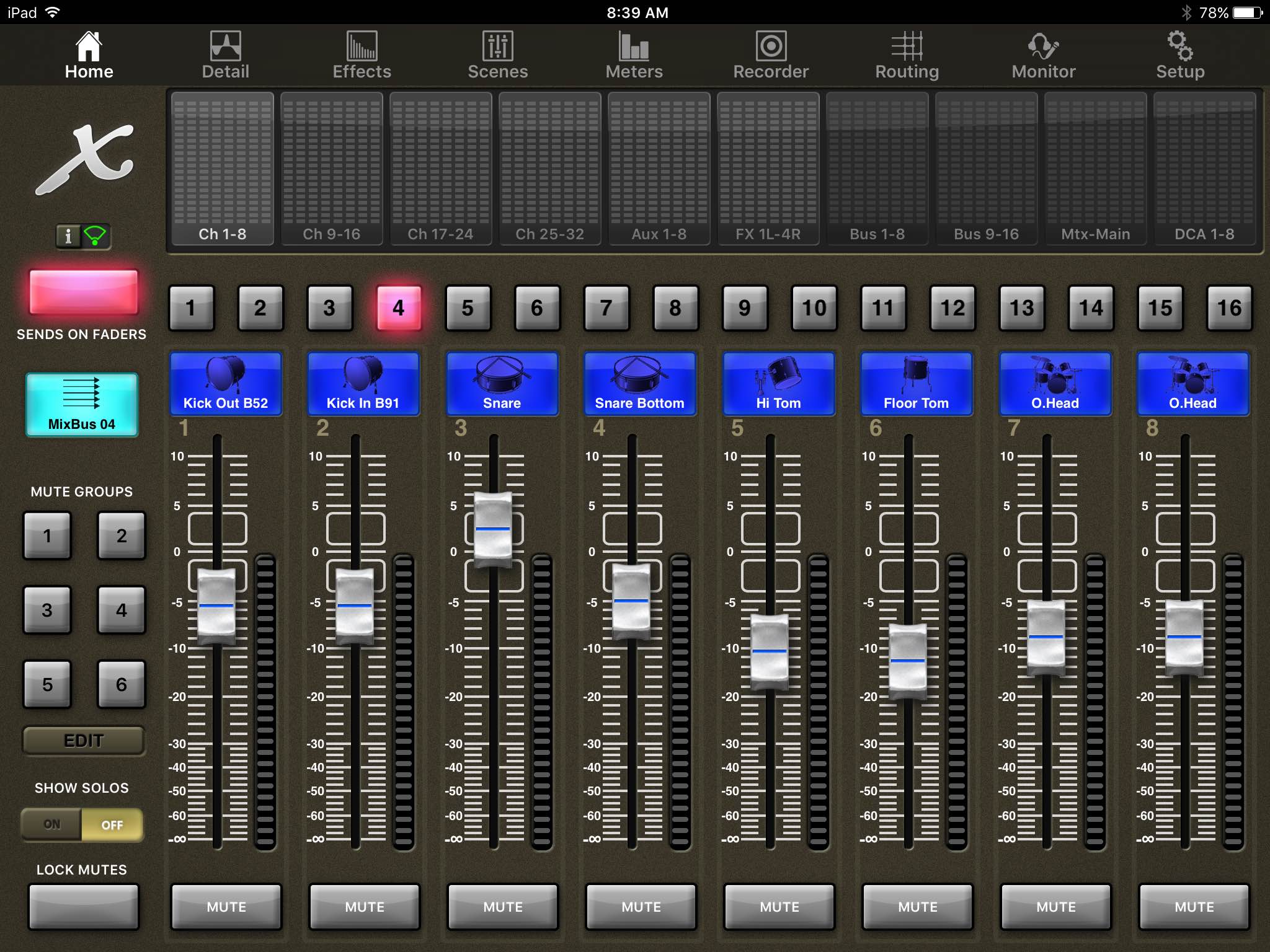 Mixing monitors is one of my favorite things on the iPad. Once you press ‘Sends on Faders’ the screen will flip into mixing the mixbusses. Change mixbusses by pressing on the numbers above the scribble strips 1-16. If the mixbus is configured to be a subgroup, to put a specific channel into that subgroup, simply select the mixbus and then unmute the channel. (NOTE: you will be able to move the faders up and down in sends on fader even if the mixbus is configured as a subgroup, this will not change anything about the audio going into the subgroup, only the mute will control this function)

Firmware v3.04 released the Auto Mix feature to the X32. Auto Mix is available in two groups, X and Y, and is available in channels 1-8. We have our controls for turning on and off the groups for auto mix on the left-hand side of the screen.

You can turn on and off Mute Groups 1-6 with the controls on the left side of the screen. To edit the channels that go into them, press the edit button, and then press the Mute Group that you want to edit. You will then see this screen: 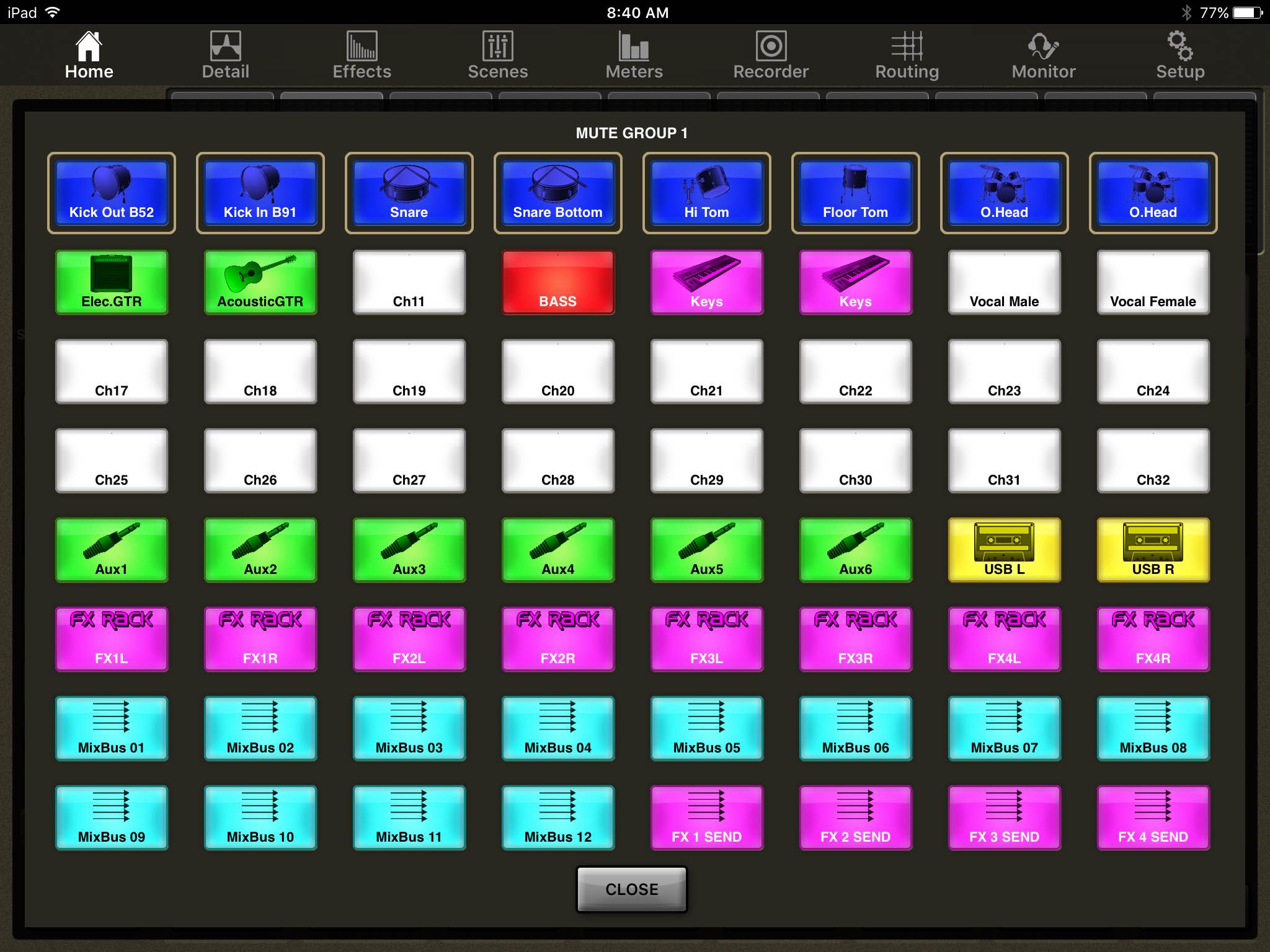 To assign channels into that mute group, just select them and then press close! Once you are finished editing the mute groups, press edit again to return to normal operation.

We have a few different solo and mute functions with the iPad app. The ‘show solos’ control will turn on and off the ability to solo channels. This would be useful for a FOH engineer that has a wireless IEM pack for himself off of the control room outs of the X32.

The next option that we have is the ability to LOCK the function of mutes with the iPad app.

Please note, that if you have channels muted and you lock the mutes, you will be unable to unmute the channels until you turn ‘Lock Mutes’ off. Also, you will still be able to mute channels from the console, the ‘Lock Mutes’ control is ONLY for the current iPad that it is on. If you have multiple iPads, each iPad would have an independent control over the mute locks.

Concluding this week’s X32-Mix App Tutorial is the use of DCA’s. Now, please remember that DCA’s are NOT an audio path, they are simply a remote control to the channels that are assigned to it.

To edit what channels are in a certain DCA, press the DCA 1-8 tab, then press ‘edit’ under the DCA that you want to edit. This screen will appear: 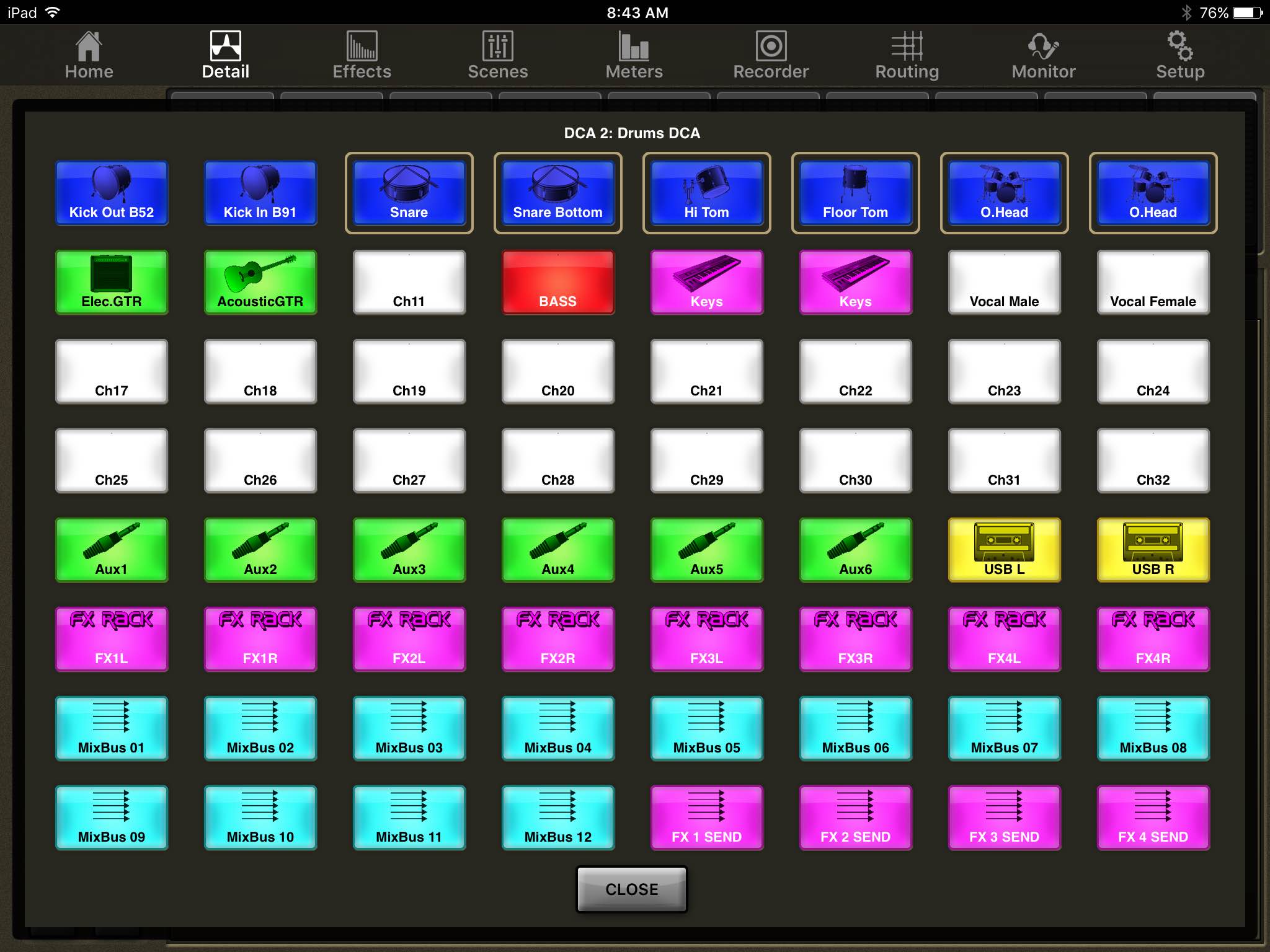 Just like the Mute Group editing, select the channels you would like controlled by this DCA and then press close. Once closed, normal mixer operation is back, no need to hit edit again!

Next week, we will go over the Detail tab of the X32-Mix App!